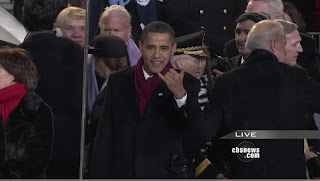 As much as anyone else in the free world, I was moved to tears more than once as President Obama was sworn in. The warmth I felt from the exiting President and his family put a "feel good" touch on the day for me. I feel full of hope and ready for change in this great country of ours.
Since we live in Texas now, in a suburb of the Big D no less you can imagine the fanfare of Former President Bush and the Mrs. returning home that same day. My hubby is from Midland, home of both G.W & Laura so that was cool to watch them touch down in Midland before heading to their ranch. The folks in the neighborhood where the Bushes are moving to are rolling out the red carpets for them, signs, flags, banners, you name it. For the most part people here seem to be happy to welcome them home. I for one couldn't believe the look of relief and pure joy on GW's face as he was wrapping up the festivities at the inauguration. While he may not have wanted Mr. Obama to follow him into office, he seemed genuinely happy to be giving the job to someone else. Can't say I blame him.
Posted by 2 Green Eyed Girls at 11:15 AM

I'm so excited about the era of President Obama. That cracks me up about W. I bet he is relieved, lol. I think he's definitely more suited for retired life. Though I will say that the transfer was nothing but gracious, on both parts, and I was proud of how distinguished everyone seemed to be.