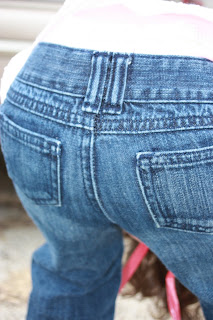 Just got back from the pediatrician with Little G...she has an ear infection. This is the first time ever in her 3 years that she will be taking antibiotics. I KNEW I shouldn't have said anything about the fact that neither of my girls has taken antibiotics since their DX, but no....had to open my big fat mouth and WOMP get it smacked shut. She'll be on amoxicillin and numbing drops (WTH?) twice a day. So I was gearing myself up for another round of "fax her logs" from Children's to get advice (read that NO advice)from a CDE when our pediatrician (who I LOVE) called. She is really up to date on the latest and greatest with T1 and did her internship with the endo unit at Children's, so I can talk to her without really having to go back to the beginning. Anywho - she tells me that Little G's dose will be once in the morning and once in the evening but that Amoxicillin is pretty much straight sugar so it's going to throw her numbers all out of whack. She suggested that I test her 1 hour after her dose and then again at 2 hours after her dose and adjust accordingly. She really understands my frustrations with Children's so this was a gift and I really appreciated the fact that she really simplified it for me and gave me pointers as to how to manage the spike. It's a good jumping off point at least.

I did have an OMH (Oh My Hell) moment while talking to her, I glanced into the mirror across from the exam table and seriously gasped. I look like hell, not a little, not a tad bit - full on, stressed out, not sleeping, packing, moving, single mom this week HELL. I swear I brushed my hair before I left the house...but I looked like I had just crawled out of my crypt. I have dark circles under my eyes that could define a new shade of hell. I wanted to cry, but alas, there is no time for that. I have 5 scrips to pick up today (running out of Humalog, Strips & Lantus, plus the 2 new ones)- I really think my family should qualify for the frequent buyers club on scrips. I have 3 more rooms to pack and Little G is following me like my dog when he's hungry. Hopefully I can tuck her into the sofa and let her nap until it's time to pick Ms.J up from school.

P.S. - Joanne, thank you for posting about what's been going on with Elise - it helped me wrap my head around what's going to be happening with Little G during her stint with Amoxicillin. You are awesome!
Posted by 2 Green Eyed Girls at 9:57 AM

Bummer :( I hope that Little G doesn't get the high blood sugars from that amoxicillin! thank goodness Joanne shared her story with all of us, I guess that is the beauty of blogging, we can learn from one anothers experiences :)

That's great that you have a wonderful pediatrician!!! It always helps when you have someone who is truly a help and not a big 'ol headache.

Ugh, sorry to hear about Little G being sick and having to be on the dreaded Amoxicillin. I hope you figure out a dose that works for you and she starts to feel better soon. Thank goodness that our 10 day sentence is almost up!

Get some rest (if you can)!

If they HAVE to have labels on food with health information...wouldn't it make sense to have it on our meds too?? If they did, maybe they would start adding fiber and vitamins to our meds to make them seem better for us. :) And maybe, just maybe, they would start making amoxicillin with less sugar!

I cringe at the thought of moving...let along a hubby out of town, ear infection, and diabetes thrown into the mix...

HANG TOUGH!!! If it's any consolation, I'm not looking so hot these days either.

Heck. I'd settle for luke warm!